Everyone wonders who baby will look like, but there's no way to know whether the traits we treasure in ourself, our partner, and our family will pop up in our offspring. However, you can make an educated guess -- here, genetics experts show you how.

Both my husband and I have brown eyes. Does that guarantee us a dark-eyed child?

No, it doesn't. Two brown-eyed parents can have a blue-eyed baby. In fact, though less common, the reverse is also possible: two blue-eyed parents could get a brown-eyed baby. "The dominance of brown eyes is a familiar lesson from biology class, but eye color is actually determined by many genes," says Kate Garber, PhD, and director of education in the department of human genetics at Emory University School of Medicine. "One gene might say, 'Let's make lots of blue,' and another says, 'Let's add some brown.' It's like layering colors from different crayons." Meanwhile, other genes control the amount of pigment. Thus, more blue pigment could trump less brown, or a variation such as hazel might emerge. It's not so much that genes are dominant and recessive but that they have stronger and lesser effects, says Robin Bennett, a genetic counselor at the University of Washington Medical Genetics Clinic, in Seattle. "Traditionally we thought dominant genes made the product and recessive ones did not. Now we know that sometimes they both do."

My husband's blond hair pales next to my bright-red locks. Will our baby inherit my bolder color?

No guarantees, of course, but you might indeed get another carrot-top if there's a redhead on your husband's side; if not, your striking color will stand out alone in the family (though you might get a strawberry blond). "A true redhead must have two copies of a recessively expressed gene," says Leta Tribble, PhD, director of education at Greenwood Genetic Center, in South Carolina. In fact, only 1 to 2 percent of people have fiery red hair plus fair, freckled skin and pale eyes -- the classic color combo is part of that genetic package. The gene could be carried invisibly through the generations, later surprising two blond or dark-haired parents.

Meanwhile, your children could have vastly different heads of hair. "You get a reshuffling of genes with each child," says Garber. Which is why it's hard to answer the classic "What will my baby look like?" question. Consider Lisa Shenton's two boys: "Our 4-year-old, Cole, has pale skin and bright-red hair -- just what my husband looked like at that age. Our second son, Luke, age 2, looks exactly like me: olive skin and dark eyes," says the Farmington Hills, Michigan, mom.

I grew up envying other kids' cute dimples. Is it possible my baby might have them?

Yes, if your partner has a dimpled grin, or if it's in the background of one of your families. "Dimples are considered dominant, and to see a dominant trait, only one parent has to have the feature to possibly pass on the gene," Tribble says. Likewise, your child stands to inherit your (or your partner's) freckles, cleft chin, cowlick, widow's peak, rolling tongue, even hairy earlobes. "These are more predictable traits that definitely run in families," says Bennett.

Of course, you can't pick and choose what comes in the genetic package. "Sometimes when we evaluate children with minor abnormalities -- say, ears that are shaped funny or webbed toes -- it turns out that it's simply something that runs in the family," says Barbara Burton, MD, clinical practice director in the division of genetics, birth defects, and metabolism at Children's Memorial Hospital, in Chicago. Turns out, those baby picture generators only show you one possible outcome among many. 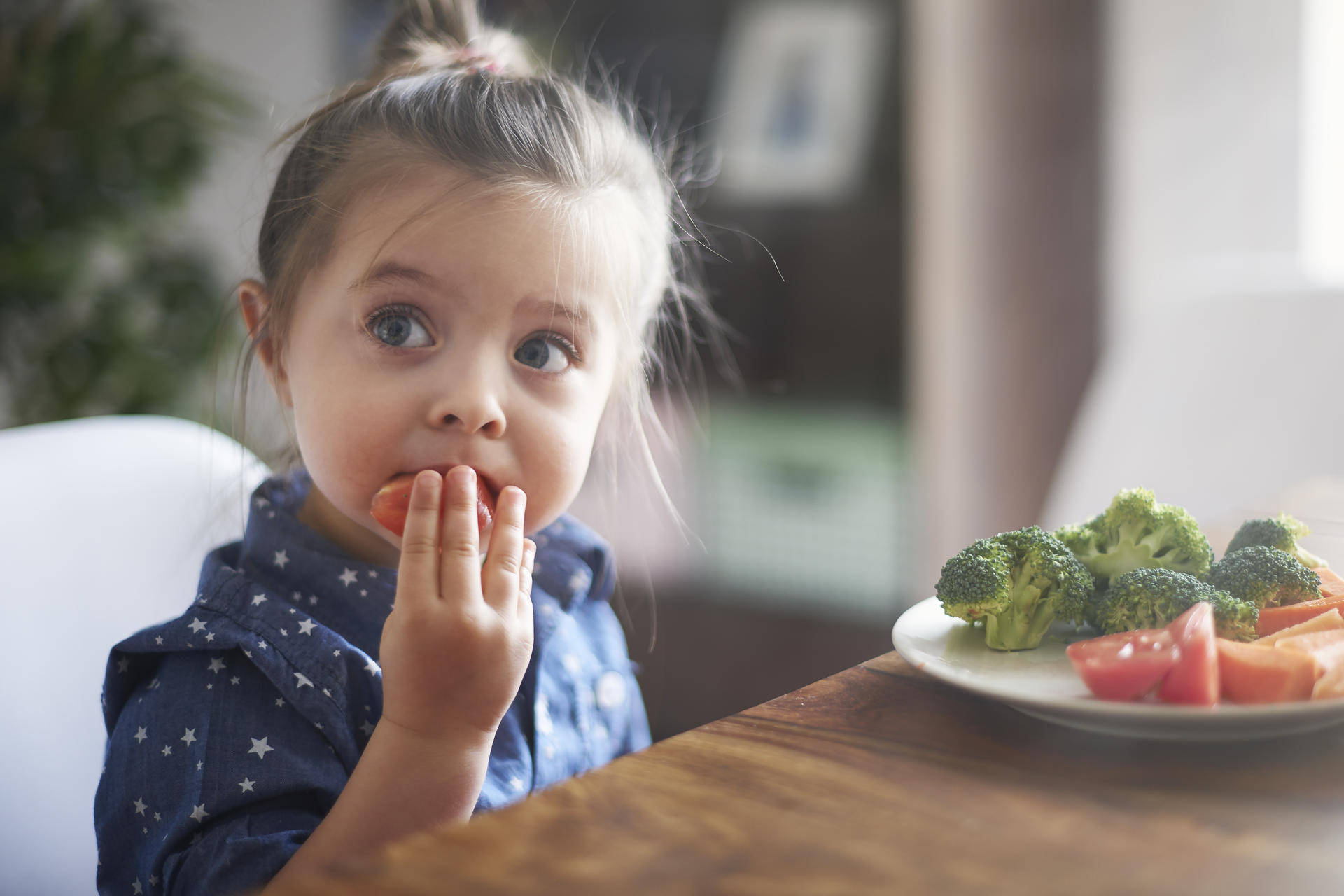 Will one tall parent and one short parent produce kids somewhere in the middle?

Generally, yes. The rule of thumb is to take the parents' average height and then add 2 inches for a boy and subtract 2 inches for a girl. Not surprisingly, two tall and two short parents tend to have tall and short kids, respectively. But rules are made to be broken. Height is a polygenic trait -- no one gene acts alone -- plus, environmental factors such as poor nutrition could prevent a child from reaching his or her potential height. "You'll see kids outside the formula in both directions," says Joann Boughman, PhD, executive vice president of the Society of Human Genetics. "Two average-height parents could have either a basketball center or a little pixie."

I've struggled with my weight my entire life, and so has my partner. Have we doomed our children to be fat and have all the health problems that go with it?

Some families are indeed more likely to pack on pounds. "We've long observed that heavier parents have heavier kids, and we now know that at least one particular gene causes increased weight," says Garber. "It appears that a child who inherits that variant from each parent will be 6.6 to 8.8 pounds heavier, on average, than someone without those two genetic copies." Of course, that's hardly obese -- it's just the one known genetic factor that almost certainly exists among others that have yet to be pinpointed, Garber says.

That still doesn't mean your family is fated to be fat. "Obesity is considered a multifactorial trait, meaning that genetic and environmental factors contribute to expression," says Tribble. "There are genes under investigation for their association with obesity, but lifestyle choices play a significant role." Your best bet: make regular exercise and good nutrition a family affair, especially during pregnancy. "You might be fighting an uphill battle, but go up the hill together," Boughman says.

It seems to me that smart people have smart kids and athletes breed athletes. Do these children really have a natural edge?

"Smart kids come out of smart houses," agrees Thomas Spencer, PhD, professor of psychology at San Francisco State University, who says studies bear out a genetic influence. But the parents don't just hand down high IQs -- they also encourage a love of learning. "Reading and talking -- including sitting down together at dinner for family conversation -- help kids develop a positive attitude toward books and learning," Spencer says. "That's something any parent can provide. You don't need money and lots of formal education."

Likewise, musical giftedness -- notably, perfect pitch -- seems to be in the genes, but researchers say it needs to be nurtured early on with training, ideally before age 7. Making the necessary connections in the brain sooner in life allows the natural ability to blossom rather than lie dormant. Of course, music lessons are not a lost cause for the child of tone-deaf parents -- but a prodigy is unlikely. "You can teach anyone to play piano, but that child will never match the level of one for whom musical ability runs in the family," says Spencer.

The same "use it or lose it" message applies to athletic ability, another inherited trait: a natural athlete won't become a powerhouse by just lounging around. "A kid whose athletic profile isn't promising but who works hard may do better," says Alan Guttmacher, MD, deputy director of the National Human Genome Research Institute.

Again, there's no sports-specific gene; rather, individual factors predispose a child to, say, run a marathon versus the 100-yard dash. "There's a heritable aspect to how fast muscles twitch, the angle of leg bones, and how you propel yourself," Garber says.

Originally published in the October 2008 issue of American Baby magazine.

All content on this Web site, including medical opinion and any other health-related information, is for informational purposes only and should not be considered to be a specific diagnosis or treatment plan for any individual situation. Use of this site and the information contained herein does not create a doctor-patient relationship. Always seek the direct advice of your own doctor in connection with any questions or issues you may have regarding your own health or the health of others.