10 Thanksgiving Foods to Avoid During Pregnancy

In some ways, Thanksgiving is the perfect time to be pregnant. Think about it: Nobody''s gonna give you the side-eye when you go back for a third helping of mashed potatoes, and maternity clothes mean not having to worry about popping your top button on your jeans after dessert. But in other ways, everybody's favorite feast can be a challenge for moms-to-be. Pregnant women are more susceptible to food poisoning than most people, and the risks can be much more severe. So not everything on the holiday buffet table is safe to eat when you're expecting; in fact, you might be surprised to hear which classic dishes are off-limits.

Of course, there are still plenty of perfectly harmless treats to indulge in this year (and pumpkin pie is one of them, phew!). As for the others, here are 10 traditional items you're better off avoiding until next time. 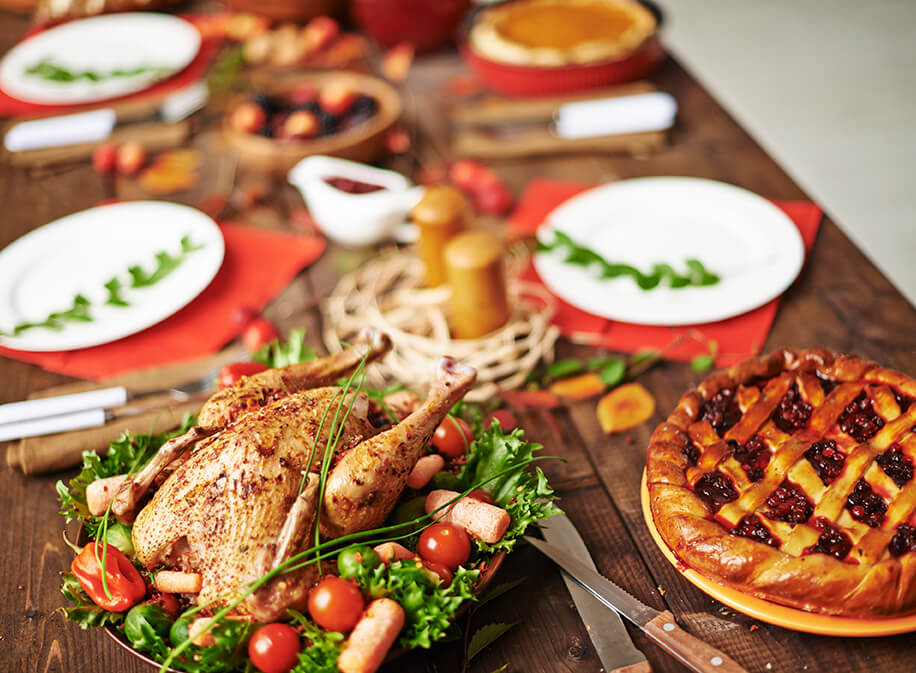 1.Stuffing Cooked in the Turkey

Many of us grew up with our moms cooking the stuffing, well, stuffed inside the turkey. That was before the frightening truth about this popular preparation method became common knowledge, however: While cooking, juices containing salmonella can seep into the stuffing from the turkey (to kill the bacteria, the stuffing would have to be cooked to a minimum of 165 degrees Fahrenheit, which means overcooking the turkey). You don't have to give up stuffing altogether, thankfully -- just make sure it's prepared separately from the bird.

Before you park yourself by the fruit and cheese platter, make sure you're not spreading anything potentially dangerous onto your cracker. Soft cheeses like Brie, Camembert, feta, Mexican queso fresco and blue-veined cheeses are often unpasteurized, which means they can harbor listeria (a particularly dangerous bacteria for pregnant women that can lead to miscarriage or pre-term labor).

Mmm, who doesn't love hollandaise sauce over asparagus (or pretty much anything else)? Tragically, because the egg yolks in hollandaise aren't fully cooked, this brunch staple is another potential source of salmonella. Sheesh.

As enticing as a smoked salmon appetizer might be (especially when you feel like you might pass out from hunger waiting for the turkey to be ready), smoked salmon -- and other fish -- can harbor the dreaded listeria. (One way to have your lox and eat it too: Pop it in the microwave until it reaches an internal temperature of 160 degrees.)

Nothing says seasonal like orchard-fresh apple cider. Sadly, this festive fall beverage is oftentimes unpasteurized, and has been linked in recent years to outbreaks of E. coli (yikes!). If you're really craving the drink, make sure that the label says "pasteurized" to be safe.

Another danger lurking on the appetizer table, pate can contain high levels of listeria (even the vegetarian versions).

You might think you're making a healthy choice by filling up on crudité, but you'll want to make sure those carrot sticks and broccoli florets are thoroughly washed: Raw vegetables can be contaminated with the dangerous parasite toxoplasma.

Tempting as it is to lick the beaters when you're whipping up a bundt cake or a batch of brownies, uncooked batter contains raw eggs, which -- you guessed it! -- equal the possibility of salmonella. Sorry!

If getting through a big family gathering without a few drinks seems unthinkable, you're not alone. But while some obstetricians say the occasional glass of wine won't hurt your baby, the studies about drinking during pregnancy are still scary enough to make many moms-to-be take the "better safe than sorry" route when it comes to alcohol. Sparkling (pasteurized) cider, anyone?

Everybody loves turkey sandwiches the day (week?) after Thanksgiving! How do we know? Because every year, over 400,000 people get food poisoning from Thanksgiving leftovers (in many cases, because the food was left out at room temperature for over two hours and/or improperly stored in the refrigerator). Kinda makes you want to call out for pizza!

This might sound like a lot of stuff, but don't worry! Most of these are totally doable or can be avoided with some quick and easy substitutions. And, hey, look at the bright side: at least there's always the pie!