6 Not-Dumb Questions You Have About Pregnancy Sex

Just  because you have a bun in the oven, it doesn’t mean you can’t have fun  in the sheets. Yup, as scary as it might sound to mix his P with your  growing B, there is no reason you shouldn’t enjoy a romp sesh whenever  you feel like it (unless your clinician has told you otherwise). 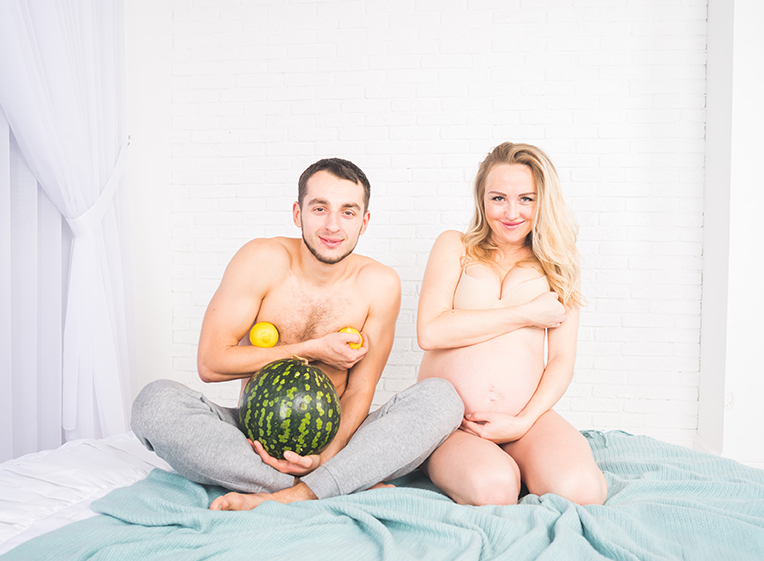 “The biggest question I get is, 'Can I have sex while I’m pregnant?'” says Alyssa Dweck, M.D., gynecologist and co-author of The Complete A to Z for Your V.  (We'll say it again: Yup, you can.) But while Dweck says a lot of women  don't ask their gynos about pregnancy action because they find the  topic taboo, it's totally normal to have tons of other questions about  getting it on while you're expecting. Some of the other burning  questions that Dweck says come up a lot: How is your sex drive affected  when you're pregnant? Will getting it on harm the health of your baby in  any way? Which sex positions are best when you're preggers? And that's  just for starters.

And no matter how awkward you might feel about getting it on with a  baby on board, you should absolutely ask your ob-gyn about any sex  concerns you have.

In the meantime, that’s where we come in. We went ahead and tapped  two pros for the most common “not dumb” pregnancy sex questions they get  all the time because, let's be honest, nine months is a long time to  wait for sex.

Sex is not going to cause a miscarriage,  says Leah Millheiser, M.D., ob-gyn, director of the female sexual  medicine program at Stanford. Even during the first trimester, when the  risk for a miscarriage is higher, you've got the green light to get it  on as much as you want.

But, there’s a caveat! If you’re having what docs call “a threatened  miscarriage,” meaning you’re spotting and your doctor doesn’t know  whether that bleeding is a sign of a future miscarriage, you should  avoid sexual activity, says Millheiser. Similarly, if you’re  experiencing any bleeding, premature labor, or placenta previa (your  placenta is unusually low in the cervix), then you should not have sex.  But if you’re symptom-free and your ob-gyn doesn’t tell you otherwise,  doing the deed during any trimester won’t lead to miscarriage.

Unfortunately, there’s no one-size-fits-all  answer to this one. Pregnancy libido varies person to person and depends  on what term you’re in. “In the first trimester, lot of women are  feeling nausea, fatigue, and they aren't really in the mood,” Dweck  says. But, in the second trimester, which Dweck calls “the holiday  trimester,” you may see your libido soar. After those less-than-fun  months of morning sickness, fatigue, and increased hormones, you may finally start to get into a rhythm and feel more energized—and ready to get busy.

In the final trimester some might be eager to get your freak on, but  others might feel less sexual as a result of weight gain, back pain, and  fatigue. At the end of the day, every woman experiences pregnancy  differently, and you might not feel any change in your libido at all.

Never in the mood lately? Watch a hot doc explain why you have a low sex drive:

Odds are that your partner’s penis isn’t big  enough to reach the placenta. Plus, there’s plenty of protection between  the fetus and your vagina, including the cervix, the amniotic sac, and  the uterus. Even during the third trimester, when your cervix might be a  little bit dilated, the answer remains the same, Millheiser says.

Typically no. “The chance of orgasm causing pre-term labor would be extremely small and rare,” Millheiser says. When you orgasm,  your body releases the hormone oxytocix, which causes your uterus to  contract, so it’s common for a woman to experience cramping after  climaxing. Unless these contractions are happening for one to two hours  and are getting closer together, they’re probably not labor  contractions.

That being said, an orgasm could make you go into labor if you're  38-weeks or more pregnant, says Millheiser. If you're close to the end  of your term and the post-orgasm contractions happen frequently for a  long duration post-O, you might be in labor.

On the other hand, if you've had pre-term contractions or pre-term  labor, orgasming could bring on a “spell of contractions,” which might  falsely appear to be labor contractions, Millheiser says. You might also  experience something like a “practice cramp,” which is just mild  cramping post-orgasm. But, again, these do not turn into labor. (So go  ahead, let your partner go to town on you with a Hitachi Magic Wand from the Women's Health Boutique.)

Positions that take pressure off your uterus  (woman on top, cowgirl, doggy style) are great for pregnancy sex. "Lying  on your back can cause your blood pressure to decrease because your  uterus is getting bigger and heavier,” Dweck says. “So it weighs down on  the vein that is behind the uterus called the vena cava.” Millheiser  adds that by lying on your back you can also temporarily compress the  vessels that delivering blood to the baby in the uterus. Though it’s not  harmful to try this position for a short period of time, it definitely  runs the risk of being uncomfy. Instead, try other feel-good options  like side-by-side or any kind of rear entry.

As long as your partner’s not blowing air up there, receiving oral sex while pregnant is a-okay—and should feel damn good. Umm, air?  "There is a very rare event called an air embolism, where air enters  the blood stream and blocks a blood vessel," says Millheiser. "That can  happen if you blow air into the vagina of a pregnant woman." While very  rare, the risk of air embolism is higher in pregnant women because the  blood vessels in their pelvis are dilated. So blowing air into the  vagina could "traumatize" the vessel wall and cause air to pass through,  Millheiser says. Otherwise, you're free to enjoy as much oral action as  you want.