On a scale of 1 to “I want to die,” period cramps fall pretty close to the latter end of the emotional spectrum.

Over 90 percent of women say they experience at least one symptom of premenstrual syndrome, otherwise known (not-so-fondly) as PMS, according to the American College of Obstetricians and Gynecologists. Any informal poll of the women in your life will likely tell you cramping is at the top of that list, and up to 20 percent of women deal with menstrual cramping so severe it actually disrupts their daily life, according to the American Academy of Family Physicians. 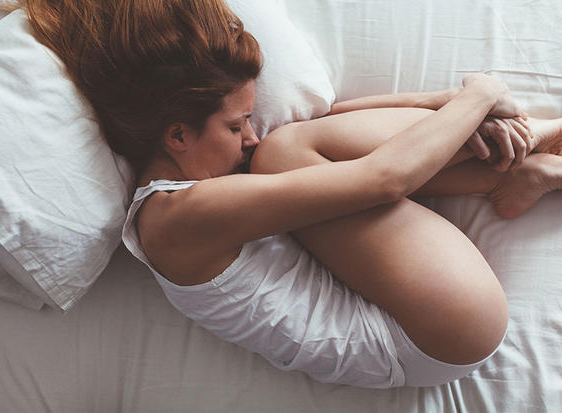 But what if you’re experiencing cramps but no period? PMS cramps typically occur in the five to 11 days before menstruation. So if you’re feeling the same sensations—you know, like someone grabbing your insides with a fist and twisting—but you’re not about to get your period, there could be other pelvic issues at play. “I advise seeing your gyno for worsening, recurring, persistent, or worrisome cramps, particularly if they fall outside your menstrual cycle,” says Alyssa Dweck, an ob-gyn and author of The Complete A to Z for Your V. (Find more inner calm and build strength in just minutes a day with WH's With Yoga DVD!)

Cramps during PMS are bad enough, and no one should have to suffer through having cramps outside of their period. So if there’s no way you can pin your cramps on PMS (or if you’re just not sure), head to your ob-gyn to determine if one of these five things is to blame. Plus, what you can do about them to make the cramping end.

“Endometriosis occurs when uterine lining tissue—which typically responds to hormonal fluctuations monthly and bleeds as a result of that—is implanted elsewhere in the pelvis,” says Dweck. This can cause a lot of pain, including cramps but no period. Women actually use the words “extremely severe, killing, and unbearable” to describe the pain of endometriosis, according to a paper published in the Journal of Advanced Nursing.

While the cause of endometriosis is unclear, the condition affects about 10 percent of women aged 15 to 49, according to the American College of Obstetricians and Gynecologists. “One popular treatment is the birth control pill, which can help manage hormones, while others include pain medication, injections to suppress hormones, and even surgery,” she says.

2.You Have Ovarian Cysts

Ovarian cysts are fluid-filled sacs or pockets that occur in or on an ovary. Most women experience at least one ovarian cyst a month, and many experience no discomfort at all. But around 8 percent of women will develop cysts that are large enough to require treatment, Dweck says.

“There are many types of ovarian cysts that can cause cramps, bloating, and pain,” she says. “Many will resolve on their own; others respond to the pill or surgical intervention.” Your ob-gyn can tell if a cyst is causing your pain with a simple ultrasound.

3.You Have Uterine Fibroids

“This benign muscular growth typically on the uterus can cause cramps, bloating, painful sex, and urinary/intestinal pressure,” says Dweck. Research suggests that at least 25 percent of women in the U.S. have symptoms typical of fibroids, but because it is possible to have fibroids without experiencing symptoms, the actual number may be closer to 77 percent.

“Typically, serial imaging like ultrasounds and expectant management, or ‘watchful waiting,’ are recommended,” she says. “Sometimes surgical intervention is needed.”

4.You Have Scar Tissue

“A prior history of pelvic or abdominal surgery can lead to scar tissue, which has potential to cause crampy pain in some women,” says Dweck. This is called Asherman’s Syndrome, and it’s a rare condition that is caused trauma in the uterus—most commonly by a D&C (or dilation and curettage procedure), but also by C-sections, uterine infections, and other surgical procedures.

“Scarring can cause organs to get kinked and thus lead to pain,” she says. “Treatment typically involves pain medication and possible surgical intervention.”

5.You Have Ovarian Cancer

Each year, over 22,000 women are diagnosed with ovarian cancer, the fifth most deadly cancer for women, according to the American Cancer Society. Ovarian cancer is “an uncommon but often aggressive cancer that has vague symptoms including pain, bloating, cramps and irregular bleeding,” says Dweck. “In fact, symptoms might be mistaken for irritable bowel symptoms. Surgery is the first line of treatment if ovarian cancer is suspected or diagnosed.”

Your move: Show up for your annual physicals. Ovarian cancer is one thing that doctors are feeling for when they perform a pelvic exam.