Pregnancy Hemorrhoids Are No Laughing Matter, So It's Time We Start Taking Them Seriously

Talking about pregnancy pain is taboo. If we're being honest, most people would prefer that us preggos pretend that we enjoy the entire experience. Our discomfort makes them uncomfortable, and that's never more true than when referring to the area below the extra-wide band on our yoga pants. Look, I understand that the general public doesn't want to know the intimate details of my behind, but neither do I think that I (or any pregnant person) should have to suffer in silence. That's why it's high time we started taking pregnancy hemorrhoids seriously. 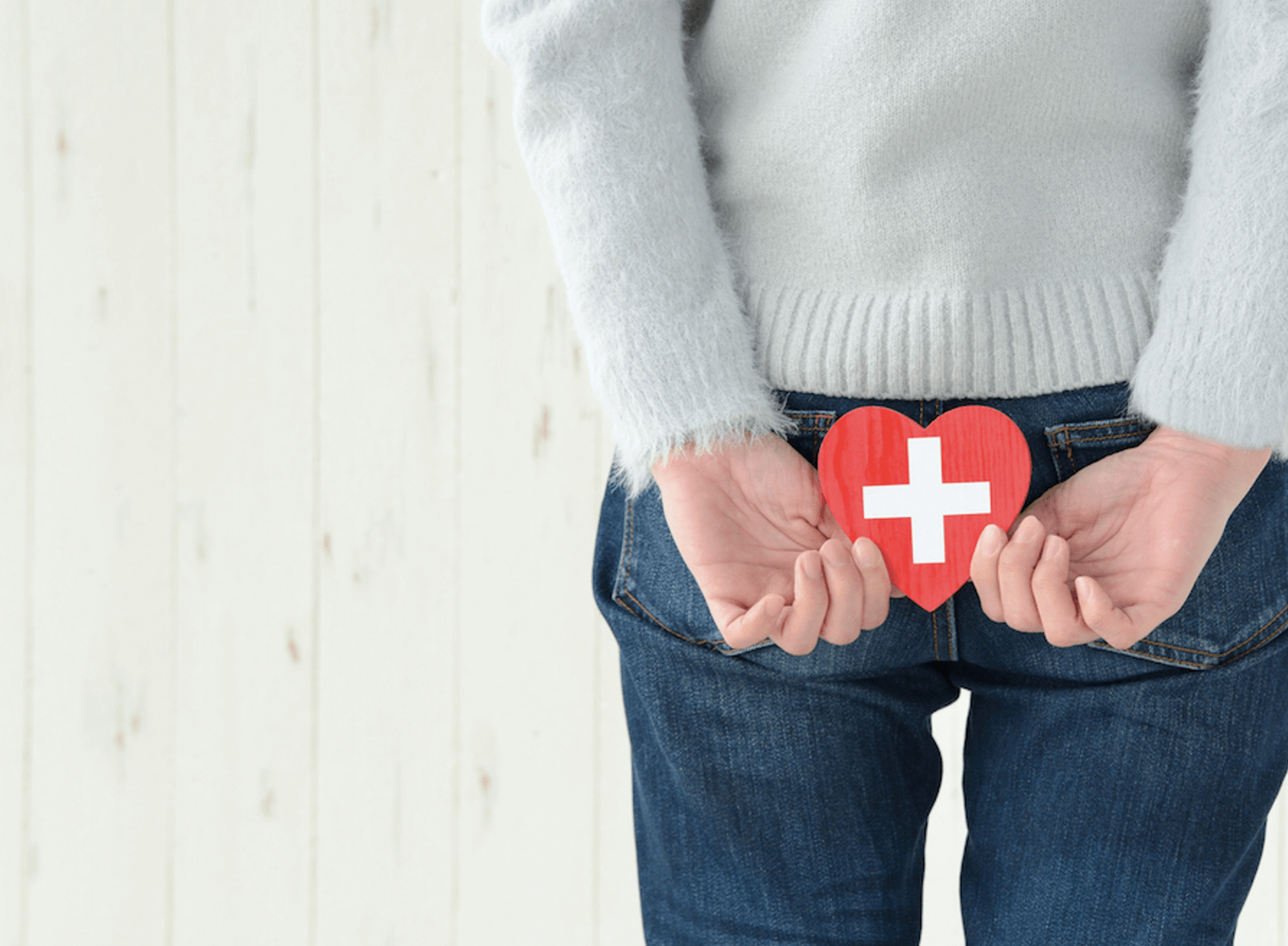 I get it. Butts are funny. I was once an 8-year-old kid, too. And there's an element of "laughter is the best medicine" here at play, I admit. Hence me referring to my hemorrhoids by traditional French names and comparing their size to various sports balls and/or fruit, depending on my mood. The problem is that many pregnant women are so embarrassed to mention anything to do with their butt that they don't seek treatment. And that sucks. Because you're already subject to seemingly infinite indignities during pregnancy, and although hemorrhoids can be horribly painful, you can totally get help for them if you're willing to speak up.

I have a long and not-so-illustrious history with hemorrhoids. My first little friends emerged after a stressful move back to the United States after living abroad. They were itchy and annoying, but they weren't anything a little witch hazel couldn't handle and soon went away on their own. Little did I know that my prior experience would put me at higher risk for another, more serious, bout of piles during pregnancy. A week before my due date, I was distressed to discover a plum-sized (current mood: fruit) protuberance between my butt cheeks. That thrombosis landed my literal ass in urgent care, where they made an incision to remove the blood clot. Seven days later, I pushed a baby out over my surgical site.

I was absolutely determined not to let this happen to me again. Before we started trying for baby number two (no pun intended), I visited a colorectal surgeon and gastroenterologist to try and determine the cause of my problems. A cat-scan and colonoscopy provided no insight whatsoever, except to confirm that I didn't have Crohn's disease. I began a daily cocktail of stool softeners, laxatives, and probiotics and decided to roll the dice. Eighteen weeks into my second pregnancy, and I got that "old familiar feeling." It was so bad that I had to have a full-on hemorrhoidectomy. This was not a "lie on your side and here's a local" situation. We're talking multiple consent forms, spinal anesthetic, and my feet in stirrups in the operating room.

Given my experience, I feel that I am well within my rights to assert that hemorrhoids are no joke. Internal hemorrhoids are generally less painful, but you may feel some pressure, itching, burning, and/or experience rectal bleeding. The fear is that they will prolapse, or become visible outside the rectum. The pressure they put on the sensitive nerve endings of your anus can make it hurt to sit, much less have a bowel movement. Sometimes, they will recede back into the rectum, but when they form a blood clot they result in an external hemorrhoid known as a thrombosed hemorrhoid, which is, frankly, the stuff of nightmares: swollen, purple or blue, and often excruciating.

This condition merits our attention not only due to its severity but because of how commonly it occurs during pregnancy. This is not an affliction of the unfortunate few. According to What to Expect, more than half of all pregnant women will get hemorrhoids, although The Bump contends that all of us get them to some degree or another. They're most common late in the third trimester. Pregnancy-related constipation, increase in blood volume, and the weight of your uterus create the perfect storm for the development of hemorrhoids. If we really took pregnancy hemorrhoids seriously we'd be preparing women, because a huge component in healing is being proactive about your care. Ignoring symptoms may make your condition worse. Babble recommends at-home treatments such as baking soda, sitz baths, Tucks pads, analgesic ointments, and comfrey. If those don't provide any relief, a pregnant woman should be able to share her concerns with her provider. There are surgical and well as non-surgical options, such as rubber-banding, about which she should receive education and to which she should have access.

Another way to show we mean business is to actively promote prevention methods. Pregnant women should be encouraged to drink plenty of water and increase their fiber intake to avoid getting constipated in the first place. Healthy weight gain is also important, as being overweight is a risk factor for hemorrhoids. It should be noted, however, that you can do everything "right" and still get them, so let's not play the blame game (i.e. "You brought this on yourself."). If you've had them before, you likely will again, and you may be genetically predisposed (because that's a fun conversation to have with your mom).

No one wants to talk about hemorrhoids, which is exactly why I'm doing it. I won't stop until the stigma does, so unless you want to keep hearing about my butthole, I strongly suggest you take the pregnant woman in your life at her word when she complains about the literal pains in her ass. She's not joking, and neither should you.